IN CHRIST WE LIVE 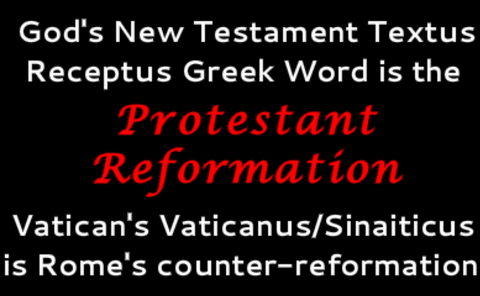 Jesus loves YOU...and so do we.

Click bottom right in videos below to view them in full screen. Download them and
air the teaching videos in your local church or anywhere, at your expense.

Jesus died and rose to save YOU. 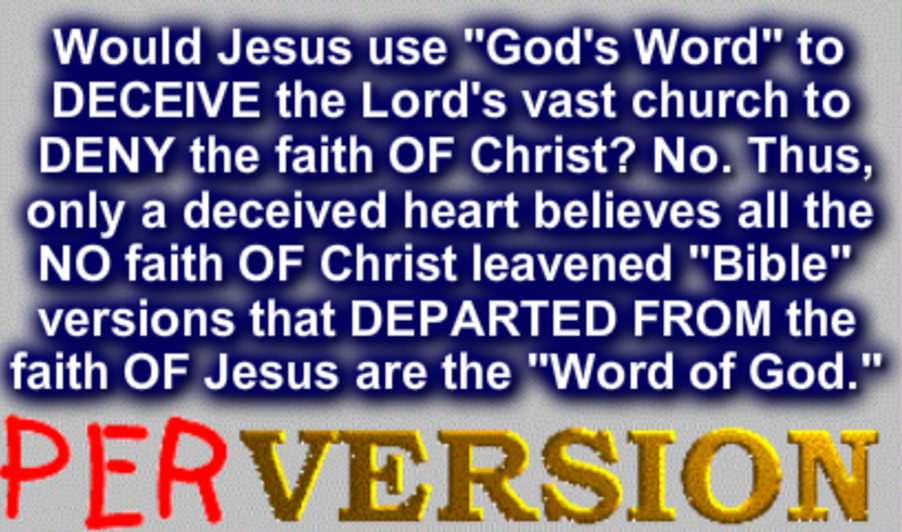 Our New Testament Bible history begins with the Eternal Living Word Himself - the Lord Jesus Christ. "In the beginning was the (Hebrew/Aramaic/New Testament Textus Receptus Greek) Word, and the Word was with God, and the Word was God" (John 1:1). In Rev.19:11,13, His Name is called the Faithful and True Word of God. Jesus is not "a" word, but "THE Word."

Textus Receptus is the name of the Greek family of Manuscripts that proceeded out of the Greek mouth of God which the Authorized King James Word that SATAN HATES and all PRE-1881 Protestant Bibles were translated from in the many languages of the world.

The 1881 onward versions are not translated from God's Textus Receptus Greek Word, but they were translated from the two Vatican-owned Vaticanus/Sinaiticus Gnostic Greek Manuscripts known as the "Critical Text" family of Manuscripts (this is their official name as they "critically disagree" with each other by over 20,000 words), and we know God is not a Greek author of confusion over 20,000 times in His "inspired" Greek word.

We're not attacking anyone, as satan alone is our enemy, not any precious brother or sister in the Lord Jesus Christ. We're simply giving the truth of our Bible history, and you can determine for yourself what "version of Jesus" you want to believe, preach, teach, and follow.

The Gnostics also didn't believe the Lord Jesus Christ is THE TRUTH Himself, so they changed John 7:8-10 to make Jesus lie here by taking out the word "yet" - "I am not going to this feast," but then Christ goes to the feast which makes him a liar. Check your version if Jesus lies here. There are 20 popular versions missing the word "yet," but it is written in God's King James Word that SATAN HATES. You can determine for yourself if you want to follow and preach from any version that reveals Jesus lied in this passage of Scripture here.

The True and Living Christ is "THE TRUTH" - He cannot lie in His True Word. Ye shall know false christs by their fruit of lies, errors, and leaven of corruption. The thing about deception is those being deceived don't know it until THE TRUTH comes to expose THE LIE to make them free from the deception.

The Faithful and True Living Textus Receptus Greek Word (Christ) and His true Textus Receptus Greek into English Authorized King James Word that SATAN HATES is pure, holy, infallible, inerrant, unadulterated, and RIGHT; and the leaven of lies and errors is WRONG in the mind of Christ and in the sight of Jesus, based on the Lord's Own Word.

The 1881 onward bible versions are translated from the two Vatican-owned Vaticanus/Sinaiticus Gnostic Greek manuscripts which all the Protestant Reformers such as Tyndale, Luther, Calvin and Knox, and the entire PRE-1881 Protestant Church had REJECTED as a corrupted and perverted Greek word of God.

Today, if you went into any bookstore and you saw 50 bible versions on the shelves. There are literally only TWO BIBLES from the 50 versions. 49 versions were translated from Vaticanus/Sinaiticus (which critically changed God's word by over 9,800 times, and they have over 4,800 LESS words than all of God's Textus Receptus Greek into English Bibles - see Romans 8:1 as an example). And the other 1 Bible is the Lord's last 100% Textus Receptus Greek into English Authorized King James Word that SATAN HATES still  widespread in print today.

In John 1:1, Jesus is "THE Word" - not "a" word ("a" means one of many versions). Jesus doesn't have 100's of different versions of His Word sitting on a big table in heaven that all critically disagree with each other by 10% or more which is the legal requirement for any version to obtain a copyright. Jesus doesn't have Vaticanus/Sinaiticus sitting next to His Textus Receptus Greek Word in heaven, as Vaticanus/Sinaiticus CRITICALLY disagrees with His INSPIRED Textus Receptus New Testament Greek Word by OVER 20,000 words/times!

The Vaticanus/Sinaiticus NIV version has over 64,000 LESS WORDS than the Textus Receptus Authorized King James Word of God, so the NIV version of Jesus doesn't want his readers to live by these 64,000 words (neither preach or teach them) that proceeded out of the Hebrew, Aramaic and Textus Receptus Greek mouth of God (read Matt.4:4); for they CANNOT FIND these 64,000 WORDS OF THE LIVING GOD in their NIV to live by, preach or teach. The Vaticanus/Sinaiticus NIV version of Jesus CRITICALLY disagrees with the Faithful and True Textus Receptus Greek into English Authorized King James Jesus by over 64,000 WORDS.

MOST Christians today don't know this bible history, and satan has used their ignorance against them to deceive them to follow the lie.

The entire books of 1 Timothy, 2 Timothy, Titus, Philemon, Revelation, and Hebrews 9:14 to 13:25 is missing from the Vatican-owned Vaticanus Greek manuscript (as the Roman Catholic Church is contrary to all of these "Church books" in Scripture such as men forbidding to marry which is a lying doctrine of the devil, Hebrews says Jesus is our one sacrifice for sins forever which condemns and voids the Eucharist, and Rev. reveals them for who they are).

God is not the Greek author of confusion in His inspired Textus Receptus New Testament Greek Word which Authorized King James that SATAN HATES and all of God's PRE-1881 Protestant Bibles were translated from. This is WHY ALL of the 5,200+ Textus Receptus Greek manuscript mouths all WITNESS EACH OTHER because it is impossible for God to be a Greek liar. The only variance seen in the Textus Receptus manuscripts is spelling of cities and names such as "Peter" is changed to "Petro" but they are all the SAME WORD; for God promised to forever preserve His Word.

In Copyright Law, God's word must be "critically" changed by 10% or more in order for any new version to legally obtain a copyright. To obtain a legal copyright, the New King James version got out of God's Textus Receptus bed over 1200 times and it jumped into the Vaticanus/Sinaiticus Greek bed over 1200 times. This is why the New King James is "critically" different over 1200 times than the Authorized King James that SATAN HATES. This is WHY the Authorized King James is the MOST HATED bible in the world today because satan knows it proceeded from the Textus Receptus Greek mouth of God.

Jesus said, "...when affliction or persecution ariseth for the word's sake" (Mark 4:17). In history, satan has murdered over 50 million Textus Receptus Bible believers, but he murdered no Vaticanus/Sinaiticus believers. So we know which Greek word the devil himself believes proceeded out of the Greek mouth of God based on the enemy's fruit of persecution - Textus Receptus which means "Received Text" and this name is based on 1 Thess.2:13.

Many Christians today say they love God's word and they love all versions, but the devil has deceived some to continually despise, reject, and/or hate God's King James Word ALONE (not understanding the devil deceived their hearts to be "King James ONLY" as they only attack, scorn and hate God's King James Word alone), and they only despise those that love Jesus and His King James Word. However, they ignore and don't attack any other Christian today for loving ANY of the other versions, nor do they personally attack any Jehovah Witness for loving their New World version. "Beware ye of the leaven of the Pharisees, which is hypocrisy" (Luke 12:1).

We believe God is LOVE, not hate. We will never attack any Christian for loving God's word, as SATAN ALONE is our only enemy - DEFEATED enemy! It is SATAN who wants Christians to attack and hate each other over God's word - not God! "Whosoever hateth His brother (including his brother who loves Jesus and His King James Word) is a murderer: and ye know that no murderer hath eternal life abiding in him" (1 John 3:15).

This is your bible history. You can decide for yourself what you want to believe, and which "version of Jesus" you want to follow.

Do you believe Jesus would CLOSE His eyes and mouth and TOLERATE any and all leaven of the sin of corruption of His Word, and Christ would say "No big deal," and declare Himself as the author of confusion in His Word today (Prov.30:5-6)?

God's Word is TRUTH (John 17:17), and Romans 1 says the WRATH of God is against all those that changed the truth into a lie. In Rev.22, Jesus pours out His wrath of plagues in the Great Tribulation period to come DUE TO all of the ADDING and TAKING AWAY or DEVOURING "His words" from His Word.

The love of Jesus REJOICES in the TRUTH, not rejoices in the iniquity of the no faith of Christ leaven of corruption in God's Word, which leavens the whole lump in the sight of Jesus, based on God's Own Word (1 Cor.5:6, 13:6).